So okay, before we start, I’d like to announce the winner for my Kiss Me giveaway!
Cindy, congrats girl! I really hope you’ll love the mascara! 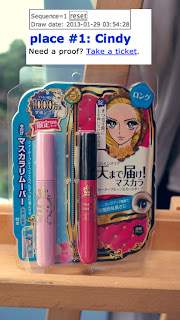 Thank you everyone for participating though, you guys have been amazing and if you are upset, fret not because I’ll be doing much more giveaways on my blog this year!

Okay so about a week ago(Sorry this is so overdue, I’ve been crazily busy over the week and had limited access on the weekend because I was in Penang and only just got back yesterday!) I had the very much privilege to being invited to Swedish House Mafia’s last tour

SO before we start, we gotta back track a lil because the story for this night actually started a few days before the event itself.
As usual we were having dinner with the gang(Karmun and Aris decided to pass on that night), and Nelson was going on about how he was really excited about Swedish House Mafia coming to Malaysia on their one last tour.I’m usually not a band name remembering person, so there are numerous occasion where I’ve heard the songs a gazillion times on radio/clubs and still not know how the band/singer is(bad habit I know). So anyways, I recognise the name from one of the emails I’ve gotten during the day and so it was decided, we were all going to Swedish House Mafia.

Closing to the date, there were of course people who were constantly posting up videos of SHM performances and songs on Facebook so I didn’t had to do much homework of finding out what other songs they played =p. Don’t get me wrong, I knew some of their songs by heart but I’m just really not good with names ey.

So Nelson being Nelson(I swear that guy is hardly ever late for anything,it’s like being late would mean the doomsday of the world for him) was starting to plan who was gonna be driving and what was the best time we’d arrive. He initially suggested 2PM(Event starts at 830!), but since Nate had to work, we decided to drive there separately. Guy was so excited he initially bought the party zone tickets, but then SOLD his tickets off, and bought another zone ticket when he found out we were gonna be situated at a different zone. Talk about enthu.

It was a very crazy night that night, considering it was a Friday night, plus it was also after work hours. You could only imagine how bad the traffic was! Was waiting for Nate to come home from work so we could leave to the event and a normal 20 minute journey took us nearly an hour to get there! I was actually a little worried about parking at first but we were very lucky to find parking at the shopping complex itself in less than 15 minutes!

So we headed to the counter to collect our tickets,

Judging by the people who actually turned up for the event, I was really really glad we were lucky enough to be given VIP tickets ! There was so many people! I guess it must be Swedish House Mafia’s charm ey!

Random photo I found in Nelson’s album, what’s the darth vador doing there?

Well since it was still a little early(we arrived at 8PM) we decided to have dinner at Pyramid, all fueled up and ready then we decided to head in for some music.
I do apologize for the bad quality of the photos as we could only bring digital cameras for the event=(

so a photo of me and Nate

Our place was actually quite far from the stage but the crowd near the stage was just impossible so I was pretty happy to stay put.

It was actually a very rainy night, personally I’m not too big of a fan of rains, I don’t know why the rain here feels extremely sticky and uncomfortable, so I was hiding beneath shelters most time round hah! But the rain sure didn’t dampen the crowds’ mood! They only got more excited when it was SHM’s turn to perform!

and a video Zana did! How talented is that girl right!

As the night ended pretty early(ended just about 11.30PM) and considering that it was a Friday night, we all went for 2nd rounds after! Which then includes alot of dancing and people getting way too tipsy. Ended the night with some really yummy porridge and then it was the weekend of We Love Asia!